Out-of-Body Experiences: All in the Brain?

Page 1 of 7
Response by three NDE researchers to an article in Nature Magazine (2002) on an induced out-of-body experience by electrical stimulation.

Out-of-Body Experiences: All in the Brain?

In 2002 an article appeared in the leading scientific journal Nature documenting an induced out of body experience through focal electrical stimulation of the brain's right angular gyrus in a patient who was undergoing evaluation for epilepsy treatment. Access to the original paper is available at the Nature website. This article is a response by three NDE researchers. This article was originally published in Vital Signs Volume 21, Number 3. 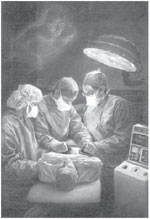 Electrodes Trigger Out-of-body Experience was the provocative title that appeared in the “Science Update” section of Nature magazine’s internet web site on Monday, September 19th (Pearson, 2002). The article’s subtitle was: Stimulating brain region elicits illusion often attributed to the paranormal, and the article began by saying, “Activity in one region of the brain could explain out-of-body experiences. Researchers in Switzerland have triggered the phenomenon using electrodes.” This research report was given lots of attention by the mass media. And because many near-death experiencers (NDErs) report an out-of-body experience (OBE) as part or all of their NDE, the research could be relevant to an understanding of NDEs. We therefore wish to examine the matter here in some detail.