Impact of the Near-Death Experience on Combat Veterans

This page is also available as a brochure (PDF) suitable for printing and distribution, though generally this page is kept more up-to-date.  (If you have trouble reading the PDF file, the Adobe Acrobat Reader is available for free download.)

What is a Near-Death Experience?

A near-death experience (NDE) is a profound psychological event that may occur to a person close to death or, if not near death, in a situation of physical or emotional crisis. Because it includes transcendental and mystical elements, an NDE is a powerful event of consciousness; it is not mental illness.

How do people react when they have an NDE?

A person who has had a near-death experience has mixed feelings. One person may express anger, grief or relief. Some will remember their NDE immediately, others may have the aftereffects and not remember the experience. Some reactions:

The person next to me was dying; we thought they were hallucinating, but what they described sounds like an NDE. Could this be true?

People who are dying frequently describe seeing a wonderful light or a landscape they want to enter. They may talk with people who are invisible to every one else, or they may look radiant and at peace. Such “deathbed visions” may be related to NDEs.

In "Nearing Death Awareness", dying people may be aware of the presence of deceased loved ones who are there to reassure them.

How can knowing about NDEs help me?

If you had an NDE, you are not alone and have not lost your mind.

When NDErs own their experience and have somebody who really knows about it, understands, and gives them the information they need, then those men and women combat veterans can begin to heal.

The Military and the NDE

Diane Corcoran is president of the International Association for Near-Death Studies (IANDS), which aims to educate people about the phenomenon, and support those who have gone through it. She’s a retired Army colonel and nurse, serving from the Vietnam War through Desert Storm, and holds a doctorate in management. Corcoran didn’t know what a Vietnam War soldier was trying to tell her in 1969 about his near-death experience on the battlefield. The term was unknown at the time, and Colonel Corcoran could see that what he had gone through was life-changing. She recognized that it was a profound and extremely emotional experience. He was so worried that he would not be believed. Following are excerpts from interviews with Diane Corcoran.

Since that day more than 40 years ago, I have made it my mission to learn more about those who report near-death experiences, especially combat veterans.

Gradually, I came to believe that many soldiers were having near-death experiences as bombs exploded and gunfire nearly took their lives. But many were uncomfortable sharing what happened, and felt they had no one to talk to. But I knew they needed an outlet – someone to share their life-transforming experience with, who wouldn’t be dismissive or think they were crazy.

There are many issues, and one of them relates to privacy and fear of disclosing the NDE to military commanders or health care providers. You may be asked to talk to your psychiatrist or psychologist in strict confidentiality, yet they may interpret the NDE as a mental health issue and put that into your record. When providers do not know about NDEs, they may think you have a mental illness and treat it with medication or other inappropriate intervention.

Commanders have great authority in the military and if you go to your commander and say, I need to talk to you privately about this experience I had, that could be the end of your career. It's a culture in which consequences can happen quickly, and because of a lack of knowledge about NDEs, it may end a soldier’s career. One soldier told me that the minute he told his nurse about his experience, he was sedated for three days and then sent to see a psychiatrist immediately. They thought he was crazy. In fact, people with NDEs are not mentally ill, but may benefit from supportive counseling to help them integrate the experience. Currently, providers are not prepared to offer such counseling.

The military depends on structure and discipline, and this often runs counter to common aftereffects of NDEs. Common effects include changed attitudes and beliefs, such as a philosophy of nonviolence, extreme appreciation of nature, high empathy and affection, and different priorities for time management.

The aftereffects of an NDE aren't always conducive to staying in the military, as NDErs may become altruistic and less rule based. The commander of a unit, a West Point graduate with a lot of experience, told me that since his NDE, he was having trouble with command and discipline issues.

All I really want to do is put my arm around these young soldiers, and say we're going to work it out. And I have to tell them that it may not work out for them in the military, so they may need to find another place that will value their change in attitude.

A US Army study released in 2004 and published in the New England Journal of Medicine reports that for US soldiers returning from Iraq, the total number of combat stress casualties might range from a one-in-five ratio to one in three. Of 6,000 returning vets, nearly one out of every five returning from Iraqi combat experienced anxiety, depression, or post-traumatic stress disorder (PTSD). The study estimated that 17 percent of soldiers coming home from lraq and Afghanistan are suffering from PTSD, along with anxiety and depression. By comparison, for Gulf War veterans ten years earlier, PTSD rates hover at nine percent. The research was performed at the Walter Reed Army Medical Center, and suggests that the military must continue to fight the stigma attached to mental health.

In 2007, the American Psychological Association released the report of a special task force chaired by an active military psychologist and comprised of psychologists working for the military or Veterans Administration. Associated Press science writer, Seth Borenstein, in writing about the report, noted that although more than three out of 10 soldiers met the criteria for a "mental disorder," far fewer than half of those in need sought help.

NDEs are occurring in these circumstances and have been demonstrated by former ABC news anchor Bob Woodruff, who was nearly killed in Iraq when a road-side bomb exploded near the tank he was riding. As reported by the Associated Press, Woodruff, while answering questions publicly for the first time since his release, told reporters, "When it actually exploded, I don’t remember that. But I do remember immediately at that moment that I saw my body floating below me and a kind of whiteness." 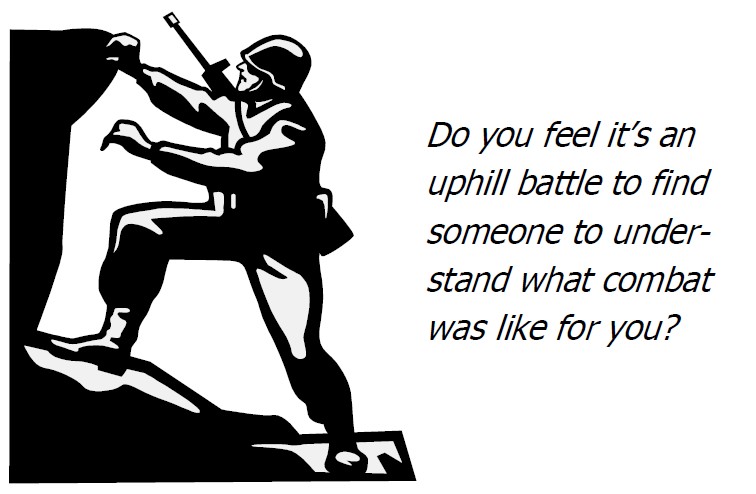 We have developed an educational program for the military environment. Col. Corcoran will come to your facility and present a lecture and program to give you basic knowledge about identifying and supporting service members who have had Near-Death Experiences (NDE). She will provide you with a lecture so you can continue training providers and assist with other resources. This would qualify for continuing education credits for all disciplines. She will also be available to help these facilities on a continuing basis until they are able to educate their own experts. There are many opportunities for research in this field, and we would be happy to assist if you have people interested.

JUST CALL — we are here to serve you. Thank you for serving!

Call us at (919) 383-7940
Contact us via email: This email address is being protected from spambots. You need JavaScript enabled to view it. or on the web