Nancy Clark, Ph.D. is a Medical Intuitive, an international lecturer and workshop facilitator on a variety of subjects. She is a certified neurolinguistic programmer and hypnotherapist.

Nancy Clark has had two near-death experiences. In 1991, she spontaneously began to see inside the body. (At that time, she had never heard the term, “medical intuitive.”) Within two months she had begun working with people who initially wanted a session. Within a short period of time, clients were asking to learn how to do what she was doing.

At the same time, Clark was invited to begin work on several projects to reduce stress in post-communist countries. As a result, her work has been presented at the European Professional Psychologists Association and the Adlerian Summer Institute. Other major projects included summer camps for teens and preteens most recently held in Slovakia. Clark discovered that young people in those countries lacked a sense of self-identity. At the camp they develop trust, responsibility and a positive self-image. 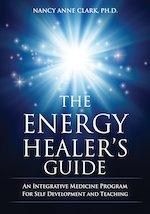 Dr. Clark has authored several books, the most recent, The Energy Healer's Guide: An Integrative Medicine Program for Self-Development and Teaching, published in November, 2011, is also available as an e-book on Amazon.
Dr. Clark currently works with several university professors and medical doctors in various countries.  She has been on television and radio as well as her public appearances. In addition to speaking at many universities and colleges, she has given talks at the United Nations in New York.
Dr. Clark has a private counseling practice with energy healing sessions whether in person or long distance. The goal of each visit is to discover disruptions in the body's energy fields and balance them. She has found that it is also important to discover and reprogram the cause of the problem. One session can save the client years of therapy.
Dr. Clark presently teaches a 100-hour course including study and clinics in “Becoming a Medical Intuitive” and an advanced 25 hour course on "Becoming a Medical Intuitive Instructor". Her web site is www.energyhealing.com.

The Self Does Not Die Spanish ed. on sale!

On Sale: Foundations of Near-Death Resrch

The Self Does Not Die  is on Sale on Amazon